Warning: This post is incoherent and may be deemed blasphemous by the uptight


Today I was inspired by some good reading over in

How to be a Cultist

"Avoid needless embarassment. Practice the correct pronunciation of your god's name in the privacy of your room before chanting it in public. Flash cards are often helpful."

Sneezy's post is full of fun links. As a student of all paths, I've learned a bit of Discordianism and felt drawn to aspects (Pastafarianism, too, come to think of it). These so-called 'Parody Religions' can be quite enlightening, if you sit down and take a close look at them.

Ultimately, though, I'm too much of a spiritualist to follow a path like that. I've always innately felt what I know to be my own spiritual truths, and they come from a variety of religions. While The Principia Discordia is indeed eye-opening and entertaining, it's riddled with glaring, if well-meant, inaccuracies:

The Law of Fives: ALL THINGS HAPPEN IN FIVES, OR ARE DIVISIBLE BY OR ARE MULTIPLES OF FIVE, OR ARE SOMEHOW DIRECTLY OR INDIRECTLY APPROPRIATE TO 5.

As I've pointed out before, and this was pointed out to me during a mystical trip to Egypt's pyramids (that was remarkably like Malaclypse & Omar's trip to the bowling alley, if you don't believe in coincidences), all things are made up of and break down into 4.

Just don't think about it too hard.

You see what I mean? With such glaring misinformation, how could I dedicate myself to such a path? While Discordians turn to The Principia Discordia for Divine Truths and see Eris as Supreme, I adhere to the truths as written in The Ultimate Authority on who is or is not, in fact, The Shit, which clearly shows that I (Supreme Ruler of All) rank above Eris (who comes in at an honorable 12th place): 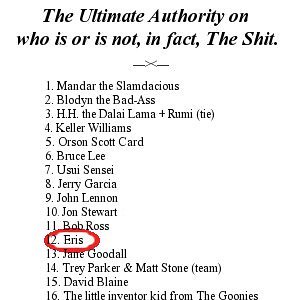 This was actually addressed at the My Goddess Beat Up Your Goddess Conclave of 3165, when the Polyfather and I struck a deal that would quietly recognize my sovereignty. In exchange for a shiny tiara and a ribbon with "The Shit" spelled out in sequins, as well as a payment of 400 pounds of cheese paid over a five-year period (sigh, compromise), I agreed to take the Bible Belt as my headquarters and distract the natives so that Southern Discordians could go on about their business and take over select cities by infiltrating area zoning boards.

(Really, the POEE was trying to get rid of potential 'problem areas' because they believed Eris was going to unleash Y2K on The Aftermath 73, and the HP was pretty embarrassed when he fell victim to one of Eris's own games.)

Anyway, that Conclave is how I went and started my own religion, the Rumilicious Order of Cool Kat Spirituality (ROCKS). Slowly but surely, we are gaining steam and shifting paradigms everywhere - and as official Galactic Empress and Ruler of All Existence, I invite you to join my Legion of Light and become a minion today! 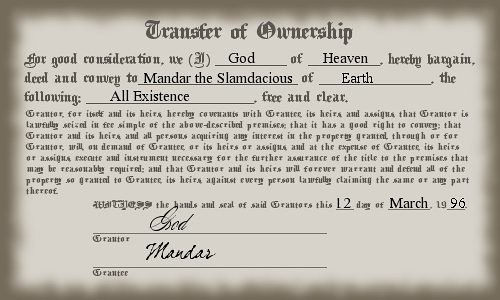