My Kid Watches WAY Too Much TV

It began innocently, with Dora the Explorer and Blue's Clues. Then Dora's cousin Diego got his own show, and I started slacking on the TV time. I realized how much Nick Jr. was helping Eden learn to talk (I sign with her, and she was a bit of a late talker). However, I'm learning it's a double-edged sword.

Five Signs It's Time To Cut Back on TV:

1. Thanks to Dora, Eden knows more Spanish than I do. I hardly know what she's saying half the time.

2. Depending on the first two chords of the intro music, she starts yelling whether it's going to be Steve or Joe.

5. Last night as we said her prayers before bed, I asked who she wanted to 'bless' tonight. After going through most of the family and all of the dogs & My Little Ponys, she ends with "And please bless the tv, God! AMEN." 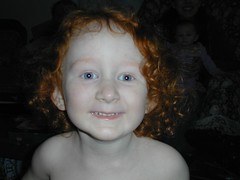