Ivy Grace is doing A LOT better. She's still kind of dragging and cranky, but at least she's playing more and getting around really well. I talked with the nurse at our pediatrician's office today, and since she's come out of it well, they made an appointment for Wednesday. BUT the nurse mentioned that they weren't even completely sure it was pneumonia...AND apparently they gave us incorrect information on her medication, which pisses me off. The nurse at the hospital told me to give her tylenol every 4 hours and ibuprofen every 8 hours - so every other time she would be getting both. I was concerned, especially after they wrote us a prescription for amoxicillin, and specifically asked him, "Isn't that too much medicine for her little body?" Well the ped's nurse says it is - that we could give her one or the other, but shouldn't be giving her both. She suggested I stick with the 4 hour meds, but I explained that Ivy HATES that but likes the 8 hr ibuprofen, so she said that's fine.

When she naps, I still find myself running in there every five minutes or so to check on her. I can't seem to stop, though I know she's bouncing back so well. I've also been very picture-happy - snapping away every time a cute thing happens. Here's a picture of her today. You can tell she's still not feeling well. She's not sleeping easily, and sometimes I think it still looks like her left eye's droopier than the right, although you don't see it so much in this picture. 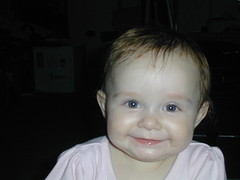 More Ivy stuff I have seen and rejoiced over:

* Taking a step - she took TWO, for the very first time!

* Holding her own water bottle

She hasn't said 'Achaiah' again, but she has been playing with her and telling her what a good girl she was: 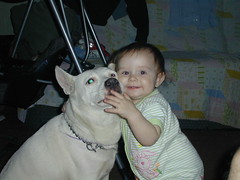 And then this morning when we woke up, we noticed something down the front of Eden's gown. Sniffing did not reassure us, so we went to check the bed...to see that apparently she had thrown up in the night (and must have slept through it). So she may be coming down with something. We gave her some ibuprofen and tried to keep her relatively calm all day, but she hasn't shown any other signs of illness. We're keeping an eye on her, though.

On an even more positive side:

I never got a chance to say, what with all the drama going on, but Friday we found a home for the brown & white pup. And today we found homes for the remaining three! It was really great how that worked out. I met a woman at church when we took the pups last week - and it was her first time in Unity - and the one we called 'Fatso' looked *just like* her old dog. So she's naming him 'Deja Vu'. I like that. She had a friend come up this week from Florida, and they came out to look at the pups so she could choose one - and she took the other (black) two, since she felt they should stay together! And she was so happy, she cried. I thought it was the best thing. She's never had a dog before. And both the women have sons, who loved the dogs. That made me so happy. They loved playing with Eden & Ivy, so I'm glad they're going to homes with children in them.

And on a sadder note:

My best friend came to visit today. He's moving to Florida this week. I'm pretty bummed about it. I really only have one local friend, you know, someone I can call up (or IM - he's deaf, lol) and go visit, or who comes out to see me. I never seem to click with females anymore, other moms & stuff. Or I'll have superficial friends - folks I associate with, mostly from church, but we don't really call each other or get together. It makes me sad, and I might try some manifesting work for a new buddy. It's more present in my mind lately - Josh hadn't really had a good buddy since his best friend disappeared. But now he's got a new buddy he met at church, and they hang out together and he's been over to the house a couple times now. I'm happy for Josh, because he's needed another guy friend, but I'm sure realizing that lack in my life as I said goodbye to David today. And David's the only friend from high school who has stayed by me all these years. He's family to my kids. He was the one who drove 40 minutes out of the way to take me back and forth to work when my car broke down, or slipped me gas money when he thought I wasn't looking, and picked me up off the side of the road several times when my bad car-ma caught up to me. I'm going to miss him terribly.
Collapse