It's funny how Beatles songs were playing every time we left my mom after visiting hours. This was the first of like two dozen. Several people commented on it. Usually they were ones she (&/or we) loved, and most we remember her singing. She was such an awesome singer.

I'm going to be writing the whole story. Not so much her story, as my story with her. A lot of this is likely to be emotional and locked away. I'm sure I'll be creating a special Christy filter. I know I have several wonderful new people who have been checking in through friends or communities. If you're interested in continuing the Christy(Amanda) story with me, just please add me first and let me know. I'll be honored and delighted to give you access.

Thank you guys so much for all the support. I was very close to my mom, and this has really been the hardest thing I've ever done. I'm so grateful for all the loving energy. I honestly might have turned feral without it.

I put 6-9 because I'm not entirely sure what days everything happened. I pretty much lost track from Monday (mom's accident) until Friday. It was all quite fuzzy and veil-like. I mentioned once in a reply how my mom always seemed to have significant dates in her life. Her accident was the Cinco de Mayo and she died on Mother's day. She was born right before Christmas. Married my dad on Friday the 13th. (I was never quite sure how that happened). Come to think of it, I was born around Memorial Day, Lyz was the day before Papa's birthday (mom's dad), and I don't think Tina's is a holiday but one of my uncles always called it Soldier Day (“March 4th!”). Anyway, the days in between fuzz together, but the big ones stick out fairly well.

I'd pretty much parked myself at the hospital from the moment I got there Monday. Family started arriving Wednesday, I think, though most of them didn't get there until Friday. I was very glad to have my dear friend Tracy at my side that first full day (Tuesday?). Tina's boyfriend Adam's parents came up right away from Gastonia, and they were really helping her a lot. Lyz couldn't really stand to be at the hospital at first, and she was mostly with her boyfriend Bano. I was so glad someone came just to be there for me. Poor Josh seemed so far away with the kids. They were coming up every day to visit, go eat lunch at a park, that kind of thing. They weren't allowed up in Neuro Trauma, and we tried to keep them away from the hospital after our first cafeteria excursion created havoc on Josh for the rest of the night.

I also had a wonderful chaplain friend from church come to visit me. Jen is the person helping me coordinate the Reiki Share I'm starting at church – today (5/20) in fact! She came just to hug me first, but she came back the next day and brought two great big bags of food – one for me and one for the girls. She also took me out for Starbucks, which had become life sustaining sustenance after trying to subsist on hospital coffee. Then while we were there, and she was just being so great and letting me vent, Jen offered me a healing attunement.

She's a Master of the Usui school, and I didn't realize there were actually different types of attunements. I was feeling way too stressed and worried about my family, and I really felt like her attunement really marked the start of things getting better. It was interesting, because that was the day after I'd tried (without luck) to go drown my sorrows. I'd bummed a cigarette at one point, and I completely started tasting it again when Jennifer did the healing. I could literally feel and taste it coming back up and out of me, and the clean feeling it left in it's place. It was actually a really cool experience. I'm pretty sensitive with energy anyway, and the week was already crazy intense. I hadn't eaten for a week and had little sleep, and I felt like I was straddling the veil anyway. Jen's attunement felt really powerful, and I did start feeling much better.

It helped that I also had some internet friends coming to visit! Two dear friends had planned to come to the wedding, and I was excited to find out that both would still make a point of coming to Asheville if I felt up for a visit. I really needed those bright spots.

First – Thursday, I think – I met my good buddy Beth and her boyfriend, who I'd met through my favorite writing forum. Beth and I used to do flash challenges every weekend when I still had the internet. We'd always be on at crazy wee hours and would act as muses for each other when we got stuck. She's the genius who taught me that dead hookers solve every plot problem. (Try it, it's eerie.)

I've tried to remember how long I've known her online now. Two years, maybe three? I could check if I logged on to LH, I'm sure. At any rate, she and her lovely other half treated me to lunch at Barley's Taproom. She was very cool, though I knew I wasn't the best company. Next time we'll have much more fun getting smashed together, I'm sure.

lessthan90sheep, who surprised the absolute hell out of me by calling and saying, “We're just outside Knoxville. Did you still want to try to meet?” I'd forgotten that they'd also planned to visit other friends in Knoxville anyway, and I was beyond stoked when I found out that they had still made the trip. I've “known” Steph for somewhere around 8 or 10 years now and have always wanted to actually meet her. We made plans to meet Friday before my Grandma flew in at 2.

Friday (the 9th), I started regaining some sense of time. Steph and her husband met me early and also whisked me away to Starbucks. Her husband Scott showed me the drum they had made and taught me a bit about making them. I can't wait to try that. He also had the coolest flute. We weren't entirely sure where to go, so they suggested pagany tourist shopping. I lean more hippy myself, but I hope I didn't let them down too much. I took them to my favorite shop where I get all my ceremony supplies. Josh called and celebrated the fact that Tracy came and took the kids for the night (it had started getting rough for him to handle them alone, and me & Josh really needed some time together since it was supposed to be our wedding day). Josh agreed to meet us up at Silver Armadillo, the very cool earthy shop.

We browsed while we waited for Josh. I got three hematite healing necklaces for me and my sister, and a card and stone for my mom. Josh and I were still kicking around the idea of getting married when everyone got there, so I bought a bag of rose quartz to give as favors, just in case. Josh showed up and introductions went round.

I went over to Earth Fare (whole foods organic store) to use the restroom, and the sidewalk musician busted into Eyes of the World as I walked by. I think I started crying. It was so weird that some random dready guy would start singing me that song. Besides the lyrics (“wake up to find out that you are the eyes of the world....”), I used to sing that song to Eden in the mornings after she was first born. I was extremely moved, and dude was really breaking it down.

We then went to walk around downtown and check out some of those shops. We found a little tree place to get some pictures. I was really glad to finally get to meet her and just chill for a few hours. 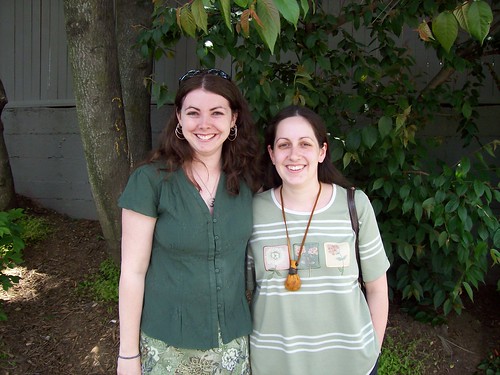 Afterwards, it was Friday so Josh and I figured we'd go get the marriage license just in case. Funny enough, Tina called right as we were getting into the car afterwards. Tina says, “We all talked about it, and we want you guys to get married. Today, the day you were supposed to do it.” I had called K'Sitew that morning, just in case. I'd called Chad too, but didn't have luck reaching him. So we told them we'd have to get some things ready, which meant I missed Grandma and the rest of them coming into town. I had been there when everyone saw mom for the first time, and I felt so bad that I wasn't there for Grandma. But we didn't have the rings on us or anything, so we headed back to the house to try to get things in order.

I think about it as the 'marriage', with the 'wedding' to follow. I'll write that up later, but there's the highlights of my week leading up to it.
Collapse