I've been trying to jump-start my creativity a bit lately, so over the past couple of weeks I've been writing descriptions for my dragons in the Ridiculous lineage project (and my holiday dragons). All of them have so far been approved. I thought I'd share them here since it's been a long while since I really wrote anything. Some of my dragcave friends have cameos, too.

All Christmas dragons embody the Spirit of Christmas, but there's something slightly off about Haggis. He embodies the Spirit of SAD (Seasonal Affective Disorder). Haggis has a chip on his shoulder because he was born with bright red stripes, and all of the other dragons used to laugh and call him names. He constantly got into fights as a hatchling and quickly gained the moniker "Haggis the Fearsome" after defeating the scroll hotshot, Han Sum, in three consecutive schoolyard battles.

Haggis usually smells of strong eggnog, and he loudly bemoans his holly-leaf wings whenever he's drunk. He rails against commercialism and will completely trash any yard he finds decorated with neon reindeer.

I started listening to the Grateful Dead when I was fourteen, right after Jerry died. I was sad that I never got to go to a show and hear them live, although I did go see Bob Weir's band Ratdog back in 2001. I like Warren Haynes and I thought he did a great job filling in on guitar and vocals. I just wanted to hear the music live, and I was not disappointed. (Well, except by the seats...)

We drove down with our friend Keia, and started by first meeting my dear friend

sneezythesquid for dinner. I think the Squidman was one of my earliest livejournal friends, so it was nice to get to meet him in person. We didn't get to hang out too long, but we did snag some pics. 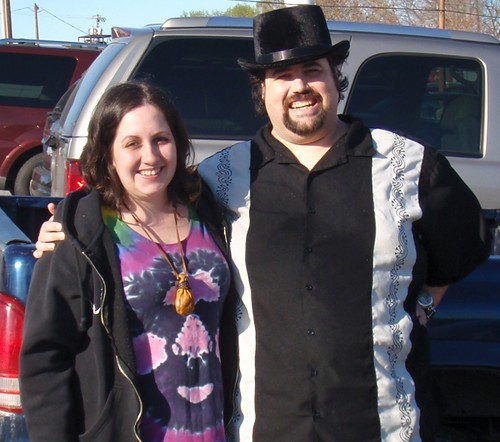 After we left him, we found a lot across from but not at the coliseum, and we parked up. I wish we'd had more time to do the whole lot thing more too, but maybe I'll get a next time at that too. We did find some ladies who were giving away free tapes, and that was really cool. We snagged a couple of those. That's why I love the Dead and deadheads – it's all about sharing the music.

Now here is what I always expected a Dead show to look like: 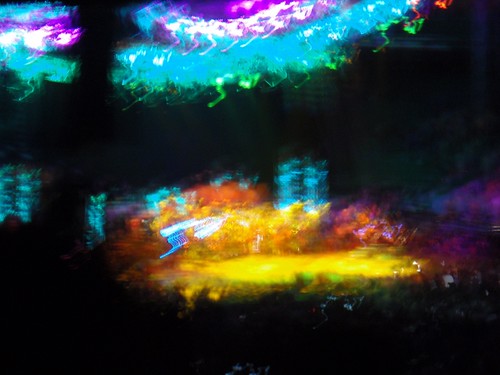 While it wasn't quite a psychedelic as I might have hoped, I will admit that I had the best darn vibe I'd had in many years. We saw quite a few families together, and I never would have brought my kids to a Dead show at that age. Even if you didn't come with a groove, the sheer overwhelmingness of standing in it assured that you left with one. There was a teenager behind us with what was presumably his parents, and I heard him exclaim at one point, “Wow, this is so intense!” It was cool.

I thought I'd get better seats, but we ended way up in the nosebleeders. You couldn't even see their screen all the way unless you ducked down (and I did for a couple of shots). I was there for the music, and it was awesome. Some bitch tried to pick a fight with me at the bar, and that kind of sucked. We had some loud and obnoxious drunks squeeze us in a bit during the second set, too. That was disappointing, but for the most part it was a very nice atmosphere.

The opened with The Music Never Stopped, which was an awesome choice, then flew right into a Jack Straw (which is a favorite of mine) and a very bitchin Estimated Prophet. Phil Lesh had this awesome bass that glowed an electric blue color. I didn't get very good pics. I'll share mine, but some much more awesome shots can be found here. Another wonderful thing about the Dead – the show went up on the Live Music Archive by the time we got back to Asheville.

Even better was the tangible Jerry-love that settled over everyone as they broke down into “He's gone! He's gone, and nothing's gonna bring him back! He's gone...” It was very moving. I held a lighter up as my candle for Jerry, and I think that's the first time I did that at a concert.

Then they played Touch of Grey, which I remember as the very first music video I ever saw.

They rounded out Set 1 with I Need A Miracle and then a very awesome Truckin'. The first set was really something special. The energy was fantastic.

Set 2 was pretty good, although I do admit to being peeved by the pack of drunk kids. One of them wasn't a Dead fan, I guess. She just wanted to yell talk the whole time.

The boys opened with a jam that went into Shakedown Street, then All Along the Watchtower and Caution. The Drums>Space portion was pretty cool. I'm usually not a big fan of the drum part, but there were some really exceptional portions. Especially when Mickey (I think? I couldn't hardly tell from where we were) played this huge thing in the back. They had a space theme going on the projector, and from what I read they were trying to conjure The Big Bang.

After that, they played Cosmic Charley – another favorite of mine that I completely knew I'd hear that day. Then New Potato Caboose, Help on the Way, Slipknot!, and ended with Franklin's Tower. (Very good live.) Then they did their fake exit, and we cheered them all back. It took a bit longer than I expected, but they came back out and did Samson & Delilah for the encore. I had hoped they might pick a longer, jammier song (okay, I did have my hopes on Terrapin Station at some point), but it was pretty good.

At least the good thing about nosebleed seats way in the back is that we were in the first of the swarm to escape. We actually got out of there pretty quickly, but we still didn't make it back into Asheville until about four. It was a wonderful concert. I've just either got to get closer next time or get a better camera.

I finally started that cut I've been talking about since New Year's-ish. Mostly I cut a bunch of communities, but also a few friends who seem to have left LJ. I haven't gone through and cut all of the dead journals, but I do plan to. I'm basically dropping anyone I haven't heard from in the past year or so, especially since mom's death.

I've enjoyed the time I've spent with everyone. If I drop you and you wish I hadn't, please let me know. If you feel like moving on, feel free to go with my blessing.