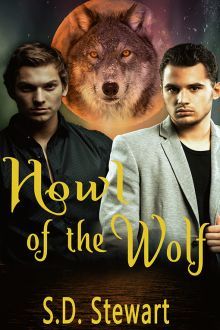 I chose Howl of the Wolf for my “Book you can finish in a day” item in the 50 Book Challenge. Full disclosure: I know the author and was given a copy in exchange for a candid review.

I enjoy both erotica and the supernatural, though I've not really read many books combining the two. So I can't compare this to any other books involving werewolves and vampires, but I liked the take on both of them. The main character's first change was well-done, although after that, it seemed to happen a lot more instantaneously than I had first thought. This tale takes Werewolf/Vampire star-crossed lovers and adds a gay twist (Trigger Warning included at end of review).

There are a few issues which stop me from giving this a higher rating. Mostly, there are a lot of grammatical errors (especially with regards to punctuation) which often jarred me out of the story. Many of these seemed to be simple issues, and I'm surprised that the editors didn't catch these. There was also a lot of telling/explaining things, especially how characters felt, instead of showing and trusting the reader to interpret rather than have it spelled right out.

The story really comes into its own when Caleb finally meets Gabriel. The book really shone in their passages together. I feel like we should have skipped a lot of the earlier exposition chapters (or maybe those portions swapping POV; between that and the time jumps, the pacing seemed off in the beginning) and focused more on the meat (ha – no pun intended) of the story that their interactions give us. Their burgeoning relationship almost seemed too rushed, and I would have liked to linger over it more. It was, however, refreshing to see a longer courtship that didn't lead straight into bed - especially in an erotic novel! I enjoyed how they took their time getting to know one another, and it was a personal connection in addition to sexual. I would have liked to see those scenes fleshed out even more before they declared their love. Gabriel is one of the most intriguing characters, and even though I'm partial to the werewolf side, I wish we spent more time with him and saw more of the vampire world.

I did enjoy the realism of Caleb's unexpected attraction and private questioning of his sexuality. I found it interesting that he seemed to question this more than finding out he was a werewolf, but I suppose those wolfish signs were there first. (Mild spoilers discussing a potential trigger warning) I feel compelled to add a trigger warning concerning homophobic slurs. Maybe if the questioning, and Caleb's wondering if it would be worse in the eyes of his Pack if he was gay or if he was dating a vampire, had come earlier in the book, I would not have been jarred so much by the use of a certain homophobic slur from one of the secondary characters. But coming upon them at the end of the book, after scenes of love and devotion, landed with a sour note for me. I know that all too often slurs are the response queer people get, but it did bother me.

Otherwise, it would have been just my kind of ending! I do wish there was a little more showing us more of the aftermath of the big climax (the plot kind, not the sex kind), but I know this is book one of a series. I look forward to learning what happens next.
Collapse