Jupiter, by Ben Bova is my choice for “A book chosen based entirely on its cover” in the 50 Book Challenge. I chose this novel because of the torus space station on the cover, as my current WIP is set on a giant torus spaceship. 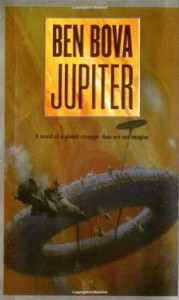 This is my first novel by Ben Bova, although I'm sure I've read some writing books or anthologies edited by him. Still, it's my first exploration of his own fiction, and while I can certainly appreciate his skill with hard science (a leaning which I am admittedly not overly familiar with), I'm not sure how I feel, exactly, about this book. I hope that writing this review will help me solidify my opinion. I'm leaning towards a 3 or maybe 4 – good, but not great.

This milieu has a very interesting premise – the religious right has gained much sway over politics, pretty much world-wide. Scientific exploration is still funded, mainly because enough of the populace insists upon it, but the New Morality (US version) and its ilk fear and suppress any discoveries related to extraterrestrial life. Discovering life on other planets (supposedly) threatens other people's belief in God (and, no doubt, the New Morality's stranglehold on power).

Now, I grew up Christian, but that neither discourages my love of science (and sci-fi) nor does it insult me to have such a future postulated. Sadly, we see fanaticism at work in politics every day, and I don't think the premise of a New Morality/Holy Disciples/Sword of Islam is as 'out there' or as caricatured as some reviewers do. A lot of speculative fiction takes a premise or theme about science vs. faith/religion, and I kind of like the juxtaposition of having them embraced side-by-side. The main character, Grant, is both a believer and a scientist.

However, the characters are, sadly, the weakest part of the novel. I have to agree with many reviewers about their flatness/one-dimension. Grant is the only one who really shows any growth, and much of that is simply because he's our POV character so we can see his thoughts and internal struggles. The others are pretty cookie-cutter, and the women in particular are treated with an attitude that is more reminiscent of old school sci-fi's Boy's Club than any contemporary, let alone future (hopefully), treatment of women. Well...given recent “#DistractinglySexy” incidents, I suppose that's just wishful thinking on my part. Still, it left a distinct distaste in my mouth. If it was supposed to be some commentary on religiosity bleeding over, which is the only angle I can think of that would have made it a tolerable exploration, then it still failed pretty miserably.

That said, I thought that the main plot and the science behind it was pretty awesome. I love what he did with the planet Jupiter, and his descriptions of the environment and its first explorers were excellent. As were his descriptions from a Jovian's point of view! That was an interesting and very smart choice. If only his human characters had been as well thought as the Leviathan. The Leviathan none-too-subtly mirrored Jupiter's version of Grant Archer, but it was well done. Its chapters were probably my favorites.

There's something of a disconnect between the premise and the execution, though. The Gold space station is supposed to be an old, somewhat discarded one. It's repeatedly described as shabby or worn. It's apparently a common purgatory for grad students and a jail cell for intelligent, well-trained criminals. I can suspend disbelief enough to say, yeah, maybe the director would get away with secret missions under minimal oversight, but when you're stressing the fraying carpet and banged up furniture, then how can he keep funding things like building a high-pressurized shuttle/submarine capable of withstanding Jovian weather, developing a special fluid for its crew to breathe in, black market nano machines to fix all the crew he keeps breaking, super-duper smartscreen walls in every room on the ship to broadcast any part of the Universe or any of its planets, smuggling dolphins/habitats/enough food for the space-menagerie, secret brain implants and experiments on & with a talking gorilla – and, to be clear, I'm always pro-talking gorilla, but still... It's fun, but when the planet and its inhabitants are thought out with meticulous attention to detail, things like that stand out and, imo, make little sense.

So, hm, I guess I do give this a middle-of-the-road 3 stars. The idea is neat, the science is awesome (at least to this softer-science person), and it had some really good parts, but it also has some significant flaws. It's not my favorite sci-fi book by any means, but I did enjoy reading it.
Collapse