Today is the day! Dewey's 24 hr Read-a-thon starts at the top of the hour! (7 am Central) This will be my third read-a-thon. I'm so excited.

As usual, I will be posting any reviews both here and at Goodreads. Assuming I finish any full books this time. I'm a speculative fiction lover, and I'm always looking for like-reading friends on GR!


1) What fine part of the world are you reading from today?

2) Which book in your stack are you most looking forward to?

Neal Patrick Harris's Choose Your Own Autobiography. This was on my list last time, and I never got to it.

3) Which snack are you most looking forward to?

Chips & salsa, if I can get off my bum and make any salsa today. I didn't quite prep as much as planned yesterday. If not: booze!

4) Tell us a little something about yourself!

I will spend way less time on the comp talking to you fine folk, no offense. I did more blog posts & challenges than reading last time, and this time I have a reading challenge to catch up and my pride to salvage.

For hour 2 mini-challenge, we're supposed to list our top 5 people/book moments from childhood. I know my mother must have read to me and taught me to read, because she was quite the book fan, but I don't actually ever remember her reading to me. Since I was 4 or 5, I've been reading on my own. As I got older, some of my memories aren't so good (abusive stepdad liked to ruin passions), so I'll do my best to find some good ones so as not to bum you out.

1. Mrs. Moore from Shamock Gardens Elementary School, Charlotte, NC! Definitely my top childhood bookish memory. Mrs. Moore was my 2nd grade teacher, and she was amazing. She lit up my childhood. Besides the amazing Willow/Faerie Tale Theater Fridays with those little ice cream cups, she was the person who told me my writing was wonderful and that I should be a writer. She even stole (I found out later, but I cried when it went missing) a short story I had written and given it to an editor friend to publish in her magazine. Because of her, I was published at 7 and have spent many of my happiest moments writing and reveling in books!

3. The Hobbit – This was my segue into adult reading when I was 10. I read pretty much mostly adult after that, with the exception of the above-mentioned books, but I could knock out multiples of those in a day.

4. Clan of the Cavebear/Earth's Children – My very first fandom! I was all about this series as a kid (Valley of Horses is actually my favorite). This book probably really influenced the fact that I'm into survivalism and ASL, actually. And back in the wee early days of internet fanfiction, these were the first stories/RPGs I did.

5. I'd like to give a shout-out to Scholastic Book Fairs for being the highlight of my school experience.

Edited to MOST STRONGLY add: This author argued with my review both here on my blog (which you can see in comments) and much, much more over on my Amazon review. She WOULD NOT STOP until several other people chimed in to echo my Seriously, do not be that author comments. Such bad form and horrible unprofessionalism! I most strongly urge everyone to avoid her novels. Damned shame, but it wasn't near worth the grief, and I cannot in good conscience leave anything remotely encouraging others to give her a chance.


Becoming Human, by Eliza Green, is my 'Post-Apocalyptic novel written by a woman' choice for my 2016 (Blended) Reading Challenge. In theory, because while dystopian, it wasn't really post- (more mid-), nor was it really apocalyptic. Kind of a slow burning out of earth rather than cataclysm & destruction. Irked me to be publicized as such, and it seems a trick for SEM. EDITED TO ADD: The author has pointed out that it's apocalyptic from the Indigene's point of view. I'd neglected to consider that since I was thinking of the 'ruined Earth' description, but that's absolutely true. 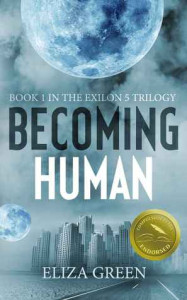 I'm kind of sitting at 2.5-3 stars for this. It was disappointing and I nearly DNF several times, but the writer clearly has some skill (for all that she seriously needs an editor). 'Good for a self-pub' doesn't seem star-worthy.

The idea is intriguing, and one I favor: Earth is dying off, and humans need to relocate to another planet. We open with terraforming chemicals wreaking havoc on the Indigenes, forcing them undergound and starting a chain reaction of both Indigenes and humans trying to figure out WTF is going on. While obviously thought out and working with known science, it was still hard to believe all these technological changes (including FTL travel) being plausible in the next 150 years, let alone while simultaneously killing off much of the entire planet.

I think it could have been a 4-5 star book with editing. As it is, the descriptions are often overwrought and occasionally hard to follow – a whole paragraph describing various hand movements when she could have said “He spun through the images and enlarged section yadda yadda...”, for example. There's a lot of very amateur character descriptions akin to 'This is Bill, who has grey-flaked hair, average height, and a pot belly' and 'Dr. Whatsit, whose black hair was slicked back in a tight bun, her green eyes flashing, and genetic mods taking a good 20 years off her face'. For EVERY character. Lots of info-dumping, including the verboten dialogue dump that starts with 'As you know/As you are aware...' Repetition that could have been cut. Etc. Editors! A self-pub must!

There are also a number of grammar issues that pulled me from the story, and these weren't any kind of confusion between British & American English (for all that regional word choices in characters from other regions stood out). These were like quick vs. quickly and, one of my huge peeves, using 'peaked' instead of 'piqued'.

There seems to be, for me, an uncomfortable level of misogyny as well. First I thought it was maybe just the one character, and I was supposed to dislike him, but no, many characters, including female characters, had to pontificate over stereotypes in the gender binary and denigrate women in their personal musings.

Okay, I guess that despite all the promise – or maybe because of it – I'm now leaning closer to the 2-star side rather than 3. I did finish it, and I was pleased that it picked up in the back half, but it lost my goodwill with an unsatisfactory ending. They cleared up -one- question that I had held in there for (and, yes, I had called it super-early, like back in chapter 3 or 4), but then it just cut off abruptly. To set up for book 2, of course. Had this one been executed just a little bit better, I'd probably go on to the next book, but it just seemed like too much work for too little pay off. It's got tons of gushing 4- and 5-star reviews though, so maybe I'm too picky. Check it out if the concept appeals to you, and let me know what you think.

The Walking Dead: Compendium One, by Robert Kirkman, is a 'To Be Read' book for my 2016 (Blended) Reading Challenge. I've read this many times over the years, and I owe it a review. 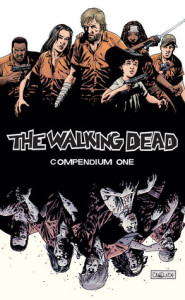 This book is much darker than the show and should probably have all sorts of trigger warnings. The grammar has serious issues, even outside of zombies a lot of things are a big stretch, there's a definite waft of misogyny sweeping throughout (although less than in the show, honestly. Andrea and Michonne are awesome here.), a bit of racism (not as much as the show)...honestly, I probably shouldn't like this book/series so damned much.

I'm not sure why, really. It's compelling. Yeah, a lot of stuff gets dark and nasty, but, very sadly, that's likely the most realistic aspect of this milieu. People are dicks, and they are dangerous. The artwork is pretty good, though I do wish they made the full panels color.

It's not for everyone. It's not even for everyone who likes the show. But if you're in a good place for a dark, interesting, and easy read, this is one.

1. What are you reading right now?

I just finished The Walking Dead: Compendium One (again) and am about to start on Choose Your Own Autobiography, by Neil Patrick Harris.

2. How many books have you read so far?

Two! I also finished Being Human, by Eliza Green. To be transparent, I have been working on both of those already this week.

3. What book are you most looking forward to for the second half of the Read-a-thon?

NPH's book. I've been meaning to read it for a long time and keep putting it off.

4. Have you had many interruptions? How did you deal with those?

Oh yes. I have kids. I try to give them attention as they need it, but they do know this is mommy's reading day. The oldest two (13 & 10) were going to join me and decided instead that Saturdays are for doing absolutely nothing, including duties asked to cover for mom.

5. What surprises you most about the Read-a-thon, so far?

I'm not really getting a lot of new friends or camaraderie this year, which is kind of surprising. Maybe because I'm not on a twitter team this time around. But it's not over yet, so hopefully I'll make some great connections again this year!

Heading outside for a hammock & roasted marshmallows! Way to get over that midway hump.
Collapse