An Amish Cradle, by Beth Wiseman, Amy Clipston, Kathleen Fuller, & Vannetta Chapman, is my book 'about religion' choice for my 2016 (Blended) Reading Challenge. 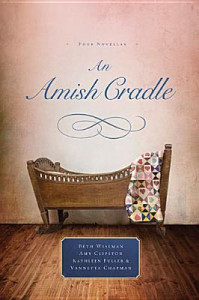 I'll start with the disclaimer that I'm new to Christian/Amish fiction. I've been researching the Amish for my own WIP, so I decided to check out Amish fiction. This book has four novellas by prominent writers in the genre, and given the 'cradle' theme, I figured it would be right up my alley since I'm well-versed in pregnancy, birth, and child-rearing.

It's a fast, easy read, and portions were fairly enjoyable, but I found myself disappointed more often than not. For having experienced multiple births, the women came across as uneducated and things that are normal and healthy were used as 'danger' tropes (one mom freaked because her baby was 'two weeks early' and a very simple nuchal cord, completely normal, was used as a 'thank Gotte we had a real doctor here' card. Bleh).

The book opens with one mom judging her 'best friend' for the normal birth noises she makes, and that particular story closes with further preachy & unresolved judging of bestie's medical choices, inferring the end of the friendship. This story, In His Father's Arms, was possibly the strongest, and it was interesting to see a young Amish couple dealing with a child who had Down's Syndrome, but the asides about the woman who made a different choice were completely unnecessary and ruined the story for me. I know this is Christian fic, but that whole side plot with the best friend was left unresolved, so it seemed to serve no purpose other than to preach & judge. Ruined an otherwise good story.

A Son for Always was my least favorite, which was sad since the concept of a recently-married Amish single mother is quite a unique take. Seeing her want to secure her first son's future and take full responsibility for that was awesome...but the woman came across as an idiot for putting her health at risk simply because she couldn't believe & see the love her husband had for both her and her son. Even though we, the reader, knew that the MC wanted to stay home, everyone around her chastizing & manipulating her about 'leaving her family' for her job came across as meddlesome and annoying. Some women like to work, and that's okay. They were not supporting her choice, because she didn't voice it, and it seemed incredibly dismissive and rude the way everyone around her spoke to her. The whole story was extremely repetitive and might have only been 3 pages if they'd cut all of the repetition of “Oh, I wish I didn't have to work, but I must secure his future!” and “Oh, if only I could be sure husband really means it when he showers both of us in wanton love & affection, especially open & unreserved for an Amish man...” and “Surely you'll be quitting the hotel soon.”

A Heart Full of Love was another repetitive bore, all the more disappointing because it could have been a much stronger piece. The mother character was far too flat and her big 'secret' strung out far too long. I barely made it through because the character had one-dimensional MIL-syndrome and showed such disrespect and undermining of her own child. I wanted to kick her out far before the MCs finally did it, and I nearly didn't finish that story because it simply wasn't fun or interesting to watch the woman bully everyone around her.

An Unexpected Blessing was much better, if somewhat predictable. I enjoyed reading about this 'change of life' baby coming into an already-established family. The ending was pretty abrupt, though.

All in all, an easy read but one that fell far short of my expectations. I was perturbed by the characters more than I enjoyed the stories, so I can't rate this very high, but if you want a quick & easy read, parts of it were educational and parts were sweet. Just not the majority of it, imo. There are recipes in the back though, so that's a plus.
Collapse