Dewey's 24 hr Read-a-thon starts at 7 am (Central). This will be my fourth read-a-thon. I really love these!

As usual, I will be posting any reviews both here and on my Goodreads account. I'm a speculative fiction lover, and I'm always looking for like-reading friends on GR!


1) What fine part of the world are you reading from today?

2) Which book in your stack are you most looking forward to?

I Am Malala: The Girl Who Stood Up for Education and Was Shot by the Taliban.

3) Which snack are you most looking forward to?

I'm currently low on snacks, so I probably have to say a margarita.

4) Tell us a little something about yourself!

My story gets told in various ways: a romance, a dirty joke, a war, a vacancy.

This year, I will be utilizing my crockpot. Or maybe delegate dinner responsibilities to the kids. 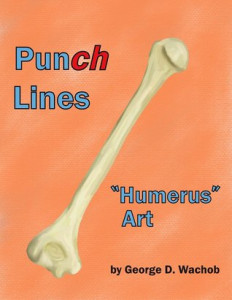 I received a complimentary copy through Goodreads Giveaways in exchange for an honest review.

I so wanted to love this book. I'm a cornball through and through. Nothing makes me happier than a fantastic pun.

As you can see from my one star review, I just don't feel this book qualifies. They were “groan-worthy” as promised, but not in a groan-so-good kinda way.

Most of these made no sense, or I would have given at least one more star for effort. Or perhaps if the illustrations had been better (very clip-arty). Many of these made no sense even with the answer key, and far too many were a stretch to fit rather than an actual pun -- either the answer or the picture chosen to represent it. The ones I did get were the obvious ones. And, as mentioned, I'm really into puns.

I'll give this to my pun-loving daughter and see if she feels differently, but I was, sadly, underwhelmed.

Becoming Nicole: The Transformation of an American Family , by Amy Ellis Nutt, is my 'book by or about a person who identifies as transgender' choice for my 2016 (Blended) Reading Challenge. I'll also go ahead and count it as my "book set in high school" that I never read for the 50 book challenge (I know only a brief part of it was, but I'm not really into YA or hs books...) 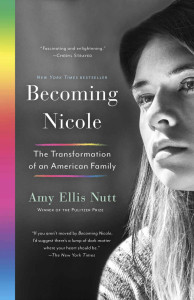 This should be required reading, imo. This was both well-written and well-researched, clearly explaining scientifically, medically, as well as personally, what 'transgender' really is...as well as how common non-binary gender/genetics is. If everyone could read this, we'd have a good deal less ignorance in the world and hopefully less hate.

As you might guess from the topic, I have to give my obligatory content warning. It was pretty hard for me, even as a cis-person, to read about Nicole's bullying. Maybe I shouldn't have chosen this for read-a-thon, because I probably should have stepped away for a bit after that part. It truly is heartbreaking, but I do think cis people need to be aware of what transgender people deal with on a daily basis. It also did a great – but not preachy – job of showing how it's so much more than “playing dress up” or “a bathroom is a stupid fight to pick”, etc. People just don't know. But if they read this, they could not walk away saying the same thing.

I give it four stars instead of five only because of some editorial decisions. The book does seem to hop through time a bit, which can be confusing, especially since the author refers to our title character as “he” and “Wyatt” until 'his' family finally got on board and allowed her to be who she really is. I get that stylistic decision, but bouncing back and forth later in the novel is, judging by some reviews, confusing for some and potentially insulting to others. Also, and possibly due to the back-and-forth (or just referring to future stuff before we get there), the pacing seemed off in places.

But it's a great, informative book with a compelling main character/subject, and I'm honored that such a private and sometimes difficult story was shared with us. Oh – and Nicole and her brother both write poetry, some of which is included. Jonas's in particular is fantastic! Loved it.

I am totally counting Ariel, by Sylvia Plath, as my 'Main character has mental illness' selection, as well as contemporary poetry collection, for my 2016 (Blended) Reading Challenge. 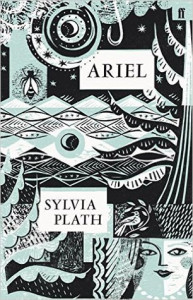 Five stars, though I toyed with the idea of four since Plath has a rather blasé attitude in her use of race/ethnicity as metaphors (or something) that makes me pretty uncomfortable. And some of these are uncomfortable.

Still, Plath has a way with words that just astounds me. She plays with their sound and spelling in such unexpected but perfect ways, and every poem is so raw and personal. This is a spectacular example. I particularly liked 'The Hanging Man' and the closing of the whole book in 'Words' – among a great many others. If you like poetry, or if you just like to play with words, I'd definitely recommend it.

1. What are you reading right now? I'm between books atm, but I'm about to read Night


2. How many books have you read so far? Three. And we're only half way! Granted, they were mostly pretty small, but I'm still astounded.


3. What book are you most looking forward to for the second half of the Read-a-thon? I Am Malala: The Girl Who Stood Up for Education and Was Shot by the Taliban, if I can get to it.


4. Have you had many interruptions? How did you deal with those? Oh, many. I remember that I love them and deal with whatever as swiftly as possible. And I mention "read-a-thon" many times if necessary.


5. What surprises you most about the Read-a-thon, so far? I guess just that I haven't had many chatters/commenters here or on twitter this year. We're all busy reading though. :)

Night, by Elie Wiesel, is the 'book in translation' selection for my 2016 (Blended) Reading Challenge. 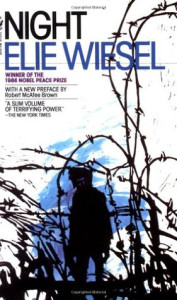 Even after sitting here a bit, considering, there's really nothing else I can say.
Collapse