Sorry that I didn't do my entry for the December Meme yesterday. My computer kept freezing up on me all day, so I finally just put it away and started a new book. At any rate, there are still tons of spots open, so if you have a question or topic you would like to ask about to get to know me better, please leave me a comment!

fliz0ntoast asked about any pets I had as a child. I really loved my dad's dog, Smokey, when I was little. He was a keeshond, and I had a lot of fun with him. He wasn't particularly well-trained though, and he would pull me like crazy around the block whenever I tried to walk him. He also humped our legs a lot. But he was the pet around when I was little, and I loved him. I was heartbroken when we went to go visit dad for the summer one year and they told us that they'd put Smokey down months earlier. Seriously heartbroken. How could they not tell us?

When I was just starting high school, we moved to a house that had a starved, pregnant border collie lurking around. We took care of her and called her Momma-dog, and we kept one of her puppies and named her Summer-dog. We weren't sure what the other half of Summer-dog was, but she was a sweet dog.

Then came my dog. My doggy soul-mate. After my one year of college, and after Josh and his then-girlfriend gave me a place to live, I wanted to get my own dog. The first one in my life that would be truly mine. I called through the local paper that had a 'free dogs' section, but every time I found one I was interested in, they'd already gotten rid of it. I tried for weeks. Then I had a very vivid dream about an all-white dog, and I knew in my heart that that was my dog, so I started looking for her.

Well, I told my mom about my dream, and she informed me that Summer-dog had gotten loose and was pregnant. The father was a full-blooded pit bull from next door. Mom would need to find homes for the pups, so she asked me to put my search on hold and take one of Summer-dog's puppies once she had them. I agreed. Lo and behold, there ended up being one pure white dog, and my mom immediately said, “That one's Amanda's.”

Boy, was she. I named her Achaiah. As soon as she was old enough to wean, I took her home and we became inseparable. I even took her to work with me. I worked at a movie theater, and she'd stay in the car during the rushes, and I would go out and walk her and play with her in between shows. That only lasted until she was old enough to be fully potty-trained and able to be left at home all day. With Josh's help, I trained her, and she was possibly the smartest dog I've ever met. We loved each other so much.

There was truly an otherworldly bond between us. There was one time I went out with my sister, and we were trying to find someone's house where I'd been once before. We left the complete opposite direction, but we ended up getting lost. I'm still not sure how I got there, but we ended up on the interstate miles in the other direction, and I saw the exit to my house. As soon as I saw it, I knew something was wrong. I yelled, “Achaiah needs me!” and sped to my house as fast as I could. It still gives me chills.

She was still pretty little at that time, and I'd had her chained to a cement block outside. Somehow she had pulled the block to the hill, obviously got tangled, and rolled, getting all wrapped up in her chain. When I got to her, she was half-way down the hill, choking to death. I managed to squeeze my fingers underneath the chain to give her air while I frantically tried to untangle the mess. Finally, she was free. I was bawling, and she was licking all over my face. We got back in the car, and my sister was like, “How did you know something was wrong?” I said, “I don't know, and I have no clue how we got here, but it's like we were meant to save Achaiah.” As soon as I said that, the light came on inside the car. Both of our doors were shut. We freaked out, and I took Achaiah back with me to the friend's house we were staying at.

Lots of people assumed I would get rid of her when I got pregnant, simply because she had so much pit, but I'd had her for years and she was wonderfully trained. I trusted her with mine and my baby's life. I put a onesie on a teddy bear and let her have it. Later, I would bring Eden home wearing said onesie. Achaiah sniffed her, I told her “Be careful”, and that was that. She was fine with the baby.

She had the best of both worlds. She was as smart as a border collie and as awesome looking as a pit. We had twelve wonderful years together before she got sick. Something to do with her uterus, and I wish I'd gotten her spayed. I spent the last of our mom-money trying to save her life, but it was no use. (Mom always called her 'Rat' because she looked like a lab rat when she was little. They really loved each other.) She died about 5 months after Maya was born. She had been sick for about a week, I think. By this time, we knew it was coming. It was late at night, and Josh was at work. Achaiah, now weak, was at the spot we'd fixed up for her, where I had been syringing water into her mouth for her. I had to nurse the baby, and I noticed that Achaiah kept staring at me. Nursing Maya was the only time I was away from her. She whined, and I told her “Just a sec” as I hurriedly nursed Maya band put her down for bed.

Achaiah waited for me to finish. I went to her and she climbed up into my lap, let out a little yelping noise, and died.

She loved wearing bandanas. She would perk up and stand a little taller every time you put a new one on her. Of course, she loved tennis balls more than anything. She'd sit and watch you for hours if you had one until you finally threw it for her. We used to set up obstacles in the house, and Josh had a neck weight that he would put on her while she ran through the obstacle course. It built up that awesome pit chest. We both got fat and lazy together in our old age. I still miss her every day. 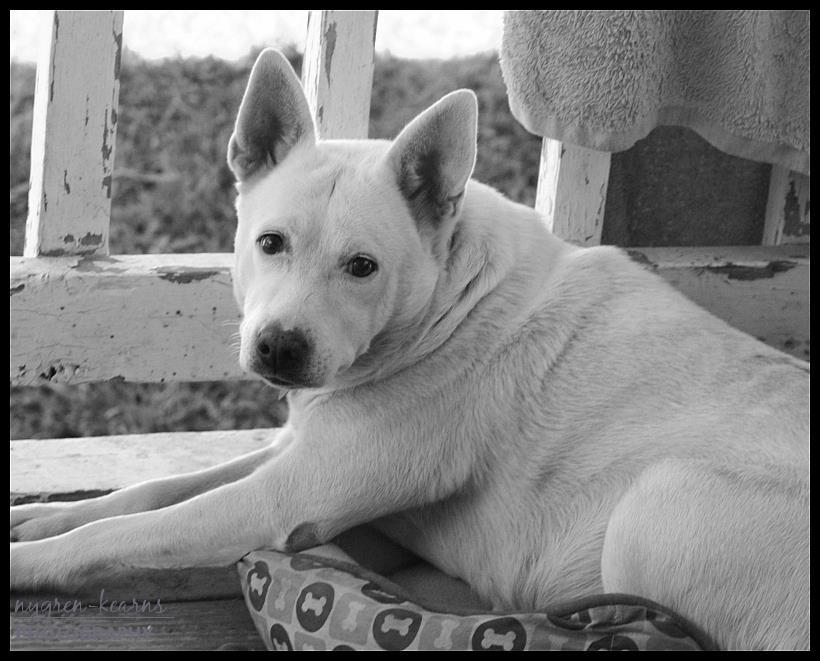 The December Meme Master Post can be found here. Please feel free to leave a question or topic!

tjoel2 asks, “When and how did you come out about your BDSM/kink lifestyle to friends and family and what reactions did you get?”

Josh and I got busy exploring. It seriously helped me through my postpartum depression.

I 'came out' to my friends pretty much right away through Livejournal. In friends-locked posts, I started sharing about our discovery, though not (yet) through graphic scene reports. Just talking about kink and our experiences going to munches, that kind of thing. Turns out I have a lot of kinky friends, so it went over fairly well.

I really only told my sister as far as family was concerned. She was intrigued and pretty much had a “Good for you” outlook. Mom babysat while we went to munches and stuff, but we never actually told her what we were doing. Mom always had a weird outlook about sex. I guess she kind of found out, or at least enough to guess. Josh makes toys, and he had made a little kinky kit with like a flogger, cuffs, that kind of thing, for my sister for Christmas. We gave it to her privately, but she was living with mom at the time (as an adult, with her boyfriend) and mom apparently found the little bag. She pitched a fit, but I think she eventually realized how silly that was.

The only big problem I had was with my doula group. A supposed “friend”, who had been my mentor and whom I trusted, printed out some of my friends-locked posts and shared with the group. I did not know this at first. They called a meeting with me and the board members and threw all this at me, insisting that I stop my kinky activities or be booted from the group. I pointed out the fact that these were all PRIVATE, LOCKED posts about my private business, which was none of theirs and I would do as I pleased. I pointed out that all of my public posts were absolutely professional in every way. I also pointed out how ridiculous it was that they, as doulas, were not even slightly being sex positive.

They particularly took issue with this icon, which could be found on my journal if people really poked around enough. We ended up “compromising” by me deleting my journal address from my email's signature, which really bothered me since I did a lot of doula education and outreach through my blog. I deleted and blocked my 'friend'. Things were never the same in my doula group, and I left a while later.

Other than that, things were pretty great. I learned that most of the friends I already had were all kinky to some degree. I started making even more kinky friends. I eventually started a separate kink journal where I would write scene reports and post pictures, and it was very liberating and healing for me. I wish I still kept up with that journal, but as the years progressed, Josh slowly stopped being interested in kinky stuff. Now we rarely 'play' if at all, and it hurts my heart.

This post is public, because fuck all them.
Collapse