Stranger in a Strange Land, by Robert A. Heinlein 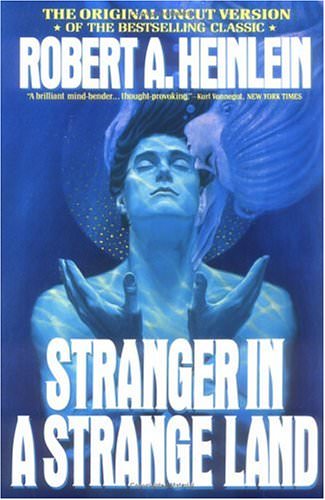 The cover touts this as “The Most Famous Science Fiction Novel Ever Written.” All of my friends seem to like it, all of the world seems to consider it a masterpiece, but I thought this was one of the most disappointing, over-hyped books I have ever read. I could barely make it through this novel.

The Good: Heinlein provides an interesting look, at least at first, at how an alien creature might behave upon meeting Earthlings. We follow the story of Valentine Michael “Mike” Smith, the first human born on Mars, who was raised by Martians. The look at alien thought processes was intriguing. I particularly liked the water-brother ritual and the relationships that grew from there.

The Bad: Despite my nonstop litany of “It's a product of its time”, I just could not get over the astounding amount of sexism in this book. It's filled with my personal peeve of constantly referring to grown women as “girls” (even though a character speaks up and points out that Mike is a man when someone refers to him as “boy”), but it also constantly refers to them as dear, honey, broads, pretty foot (my personal favorite), etc. Women are constantly treated dismissively and condescendingly, with all of them just peachy keen with the whole situation. Lest I think maybe I'm making a big deal out of nothing and letting my delicate sensibilities get the best of me, he actually says – has a female character say! – “Nine times out of ten, if a girl gets raped, it's partly her fault.” I'm surprised that I managed to read past that line and finish the book out.

Our other main character, Jubal, is simply a mouthpiece for Heinlein to philosophize and wax “poetic” on any old thought that comes to mind. He's supposed to be a wise father figure, but he's more like that drunk uncle who insists on leading all conversations because he's the only one worth listening to. A lot of his musings seem to be about Mike's eventual free love (but definitely, unequivocally, 100% no homo) ideology and religion in general. Maybe in the 60s this was some astonishing insight into morality and breaking free of the bonds of man/humanity, but I found it dull and self-masturbatory.

The scenes in “heaven” were as ridiculous as the churches he created.

I don't see the appeal.

I've got a huge chunk of days without any topics in that December meme. I'll try to think of something interesting to post about each day, but I'm not making any promises. Do please throw me a topic if you think of any.

Today I want to talk about baking! I'm really excited to be baking. It's not something I've ever been good at. The only times I really had anything turn out was when I was about to have a baby. Baking was my “nesting”. Rather than cleaning (which I really probably should have), I would always start freaking out, thinking, “I can't be a mom! I don't know how to make cookies or pies or fudge!” (which turns out to be more a refrigerator thing than a baking thing. Which shows you how much I know.)

With the kids out of the house and in public school, I have so much free time lately. I'm in need of some hobbies – and taking suggestions, by the way – and I decided to learn how to bake for real. I tackled biscuits first, but I tried drop biscuits which is really kind of a cheat. Then I made my Grandma's cinnamon roll recipe. They weren't quite as good as I remember Grandma's being, but they were still good and fully recognizable as cinnamon rolls. I'm still tweaking that recipe. I burnt them the first time I tried, back when I first got the recipe. I think either the temperature is a typo or my oven runs way hotter than hers. This time I cooked them for 12 minutes instead of 20, and they were a nice golden brown. I might try on a lower temperature next time and see if that's any better.

Today I made a whipped shortbread recipe that I found on facebook. It was a pretty simple recipe and turned out pretty decent. Had a cherry in the middle. Ivy really liked them.

I had to buy some loaf pans, but I'm ready to try to tackle bread. I'm thinking about trying this Amish White Bread recipe a friend shared with me. I don't have any bread flour though. Would all purpose or self rising work about the same? I'd like to try to make banana bread, but Maya is a banana fool and never leaves any long enough to turn. Maybe I can hide a stash or talk her into saving some for a bread experiment.

I need to get a pie pan. I'd like to learn to make pie crusts, for both fruity pies and meat pies. I have a pen pal from the UK who sent me a mincemeat pie recipe and was nice enough to do conversions and everything, but I got the letter when I was super-sick and now I can't find where I put it. I'm feeling pretty awful about that. I'm hoping I'll find it when I clean up my bedroom this week. If not, I'll look up another recipe and give it a try anyway. I probably need to get special tins for that anyway.

Are you a baker? Will you share your favorite recipe?
Collapse