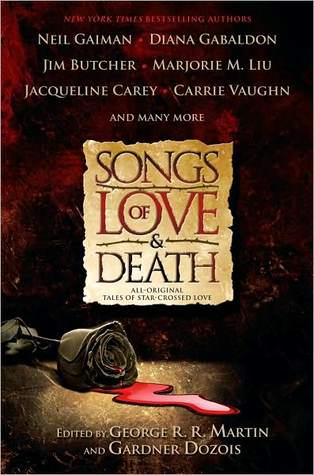 Apparently I bought this back in 2010, solely for Jacqueline Carey's Kushielverse story, You, and You Alone, which I read and enjoyed. I put the book away and only recently got around to reading the whole thing. I'm glad I read through Diana Gabaldon's Outlander series before I read A Leaf on the Wind of All Hallows, so I enjoyed finding out what became of Jerry MacKenzie. This was my first introduction to a lot of well-known authors like Jim Butcher, Neil Gaiman, and Tannith Lee.

Ultimately it took me a couple months to get through the book. The book was hit-or-miss for me, and it was too easy to put it down and not care about coming back. There's a good mix of science fiction, fantasy, romance, and maybe a little horror, but I feel like the editors didn't do the best job in stringing these together. Some of the shifts seemed jarring, and I think I would have liked it if they'd offered them one genre at a time instead of the mix that it had.

I thought some of them were pretty good, some were okay, and a few were disappointing. Overall it's an okay book, maybe three stars. If you have a favorite author in here, it's a good addition to their worlds.

Skipped breakfast, because my stomach was a wreck this morning. Felt much better by mid-afternoon. Really excited about completing my first week on the program!

I wrote several Firefly drabbles inspired by David Bowie song titles, including some femslash (which I will post to my sub!Zoë set on

ahavah as soon as I'm allowed).

If you are interested, you can find them HERE at