Love As Thou Wilt 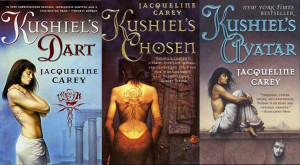 Would you like to be a young noble playing the games of thrones or courtship? Or perhaps an adept in the Court of Night-Blooming Flowers, a Cassiline Brother, the Royal Admiral, or a Menekhetan diplomat?

The Kushiel RPG is a play-by-email roleplaying game based on Jacqueline Carey's bestselling Kushiel's Legacy books. We are starting a NEW GAME. This game is set 300 years before the events of Kushiel's Dart. Come join us for intrigue, fetes, assignations, and more!

To play, you must be 18 years or older and join both the Kushiel RPG and Kushiel RPG OOC lists.

A friend of mine died yesterday, and I think I've been extra upset about it in the wake of my cousin's death. This friend, I'm not sure how old she was, but she was probably around my age (30s, maybe early 40s). She was so young and vibrant, and she was someone who's really been doing something wonderful in the world. We were only internet friends, so we weren't that close, but I knew her back from the halcyon LJ days and we've been friends for probably a good decade. My memory has gotten so bad that I can't even remember what her LJ handle was. The world is a poorer place without Anne, and she leaves behind two amazing young boys who deserve to have their mom around.

I've been really struggling with this spectre of death I'm seeing everywhere. I know that I'm not as healthy as I should be, and I fear that I haven't accomplished anything I'm meant to. My mom's early death was an accident (car accident), but now I'm terrified of dying too young and missing my girls' lives. At least I'm trying to kick my butt into gear and make some healthy changes, but I'm finding it hard to get out of this rather dark period.

I decided to default on the

chocolateboxcomm exchange, even though it's only 300 words, and I feel horrible about it. I've just got too much sad and dark stuff going on to be able to write a decent story for someone. I'm finding it hard to get into fanfiction at all right now. I figured I'd default while there was still hopefully time for a better writer to fulfill my recipient's awesome prompts. They had one I really, really liked, but I just can't get myself in the proper writing space right now.

I'll probably regret it, but I decided not to sign up for

worldbuildingex. Worldbuilding is my jam, too, so I was really looking forward to it. I nominated some cool stuff, especially in the Kushielverse, that I would have loved stories about. Oh well. I'll still watch the comm, and maybe some good stories will come out of it. I feel bad to be putting all this fun stuff on the backburner, but I think it's for the best given how much I'm struggling at the moment.

I'm finding it hard to focus on reading, too, and I'm wondering if my impressions/potential reviews aren't harsher right now because of it. I don't know if I'm struggling through two really crappy books or if I'm just in too much of a crappy headspace.

On the plus side, I have a lot of doctor appointments coming up this month, so I hope to get a bit further along with figuring out some of my health issues. I really wish this well issue hadn't happened now, and I'd be saving toward my service dog fund, but now getting water is taking priority. It's looking like it may not happen until tax time. Getting the well fixed, that is. It's increasingly looking like getting a service dog won't happen at all.

I miss my days of having 'productivity buddies'. Either here, on FB, or on chatzy, a bunch of us would often do writing &/or chore sprints together and report back in every hour with our accomplishments. Having to report in to people really helped me keep on track (and not, say, sleep the day away as I have the last two...). If anyone is interested in being an accountability buddy and checking in periodically, please let me know! I could use the help right now.

A Briefer History of Time, by Stephen Hawking & Leonard Mlodinow, is my 'non-fiction book about science' choice for my 2016 (Blended) Reading Challenge. 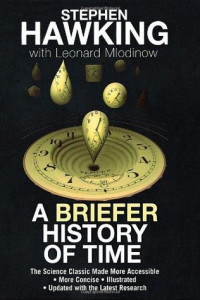 I meant to get Stephen Hawking's A Brief History of Time, but the library only had the Briefer version, so I've not read the first to compare. This one was fabulous, though. I love science, and especially physics, but I've never been very good at it. As a sci-fi writer, I view that as a huge personal flaw. I've tried. I've tried with classes, with documentaries, with books, wikipedia, Idiot's Guides...but physics has always pretty much been way over my head. I'll grasp a glimmer every now and then, but never a really great view of our Universe. This book single-handedly clarified for me what years of self-study couldn't, and so, of course, I very highly recommend it!

I still can't claim to grasp it all, and especially some of the more abstract (or newer and still developing) theories, but this book definitely helped me. They start with some review of basic laws and theories that we all learned in our childhood science classes. Still, a very obvious enthusiasm for and humor regarding the subject matter imparted quite a bit of new info for me. From scientist vs. scientist gossip, theory suppression, scientific puns (science puns!), and Marilyn Monroe pics to illustrate gravitational attraction, the book put a new spin on old knowledge and an accessible, easily understandable spin on new knowledge.

Hawking's excitement about science sweeps you up with it, and while I was at first intimidated by his renowned genius, he brilliantly cuts to the meat of the matter in simple and succinct ways. Reading this book was like sitting around squeeing & giggling with a friend about their favorite fandom, and you come away feeling a part of it and wanting to immediately jump in more. I homeschool my kiddos, who are not yet high school level, and I plan to encourage them to read it as well – with faith that they'll grasp most, if not all, of it themselves.

Outstanding book and a surprisingly fun read. I hear that it's basically a very edited version of the Brief History, but once this has percolated a bit, I think I'll go back and read the source book. Either way, I can tell this is one that I'll benefit from and still enjoy subsequent readings.

My NaNo project is the story of the first generation ship. I've been trying to put together a Space Soundtrack that I can play while I'm working on it.

I think I've got a pretty good, eclectic list of space-related songs here. Granted, in some places the relationship is thin, but I put in the song because I like it. I've also left out some songs just because I don't like them. Since I have 30 days worth of writing to do, I'd like a fairly big playlist. If anyone has any to suggest, I'd greatly appreciate it.

My list includes links to every song! I'm going to try to download them all for a proper play list (so I'm not bouncing around different sites when I should be working), but I wanted to include them here just because sharing new music is fun. :) Please feel free to leave a link if you have one.

This isn't the definitive order of the playlist, but I tried to set it up in a way that flows - for me, anyway. I'm sure they'll be reordered and everything, but this is a decent first draft.

Oh! Not every song or video is Work-Safe. Let me know if you have any to add!